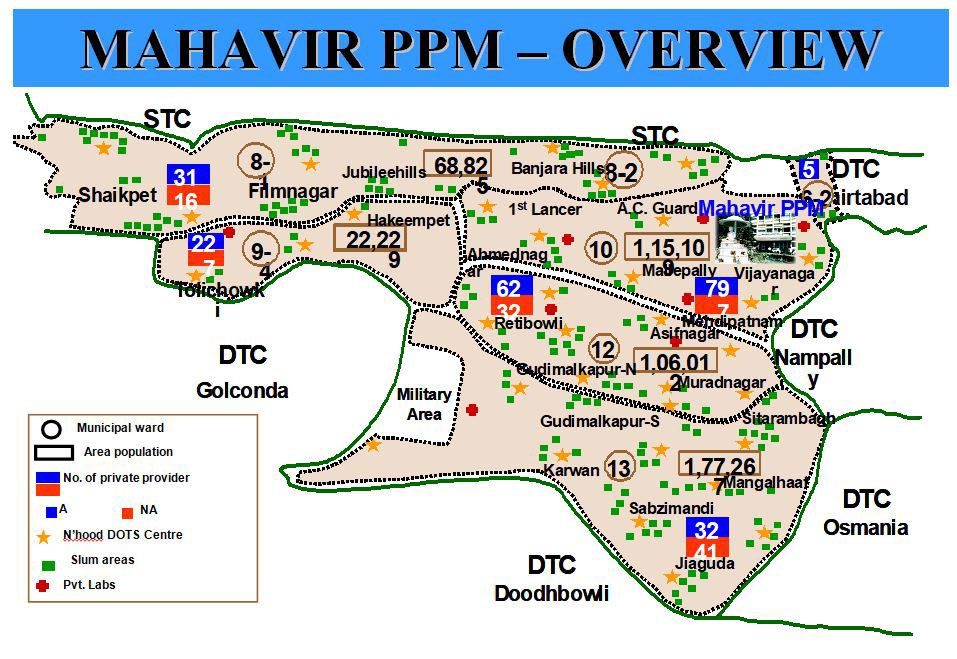 
The Revised National TB Control Programme (RNTCP) and Public-Private Mix (PPM) DOTS was launched in Hyderabad in July 1995, and is implemented by Bhagwan Mahavir Hospital & Research Center (BMMRC). First, PPM DOTS carried out initially in 1,00,000 population in 1995 and after one year it was extended to 5,00,000 population, funded by Department for International Development (DFID-UK) and sponsored by WHO, Geneva The strategy employed was to sensitize all the 110 private providers in the area assigned, for referral of symptomatics to the hospital, for sputum examination and utilize their hospital’s facilities for DOTS. After successful implementation for 3 years, the programme was scaled up to 5,00,000 population in October 1998 and grant-in aid has been sanctioned by Govermnent of Andhra Pradesh. All the 320 Private Providers in the entire area were sensitized to support the programme. The Private Provider referral rate has been consistently around 45%, while self-referrals were about 50% and the rest being referred from the neighbouring government clinics. The cure rates continued to be more than 95% though detection was between 70-80%. The approach is being diligently continued with the trust hospital functioning as an interface.


The Mahavir TU 5 lakh population is divided into two TUs: